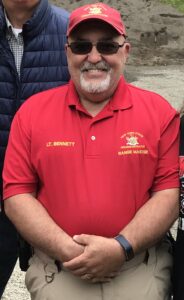 In 1991, he was hired by the New York state University Police at SUNY Cortland

Use Of Force Instructor