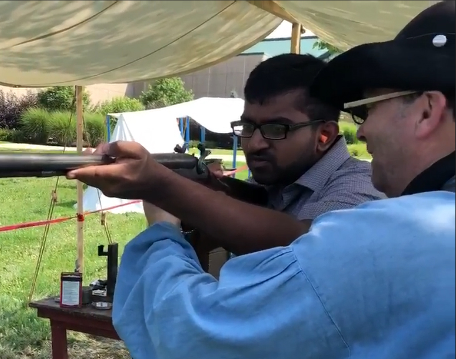 A New York college student was recently summoned to a meeting with his university when he posted videos and pictures of himself legally holding guns at an off-campus event sponsored by the outdoor sports chain Cabela’s.

The student’s situation was brought to the attention of the Foundation for Individual Rights in Education (FIRE), a non-profit, non-partisan organization, which states it is,

“ … dedicated to defending and sustaining the individual rights of students and faculty members at America’s colleges and universities.”

FIRE reports Long Island University (LIU) violated its promise of freedom of speech when they called a mandatory meeting with Anand Venigalla, a junior at the college, for his non-threatening social media posts.

LIU decided to launch its inquiry into the matter after being alerted by another student who complained that Venigalla “ … might have violent intentions, seemingly due to his participation in the Cabela’s event.”

Venigalla was contacted by LIU’s Director of Student Engagement, saying it was “imperative” the meeting happen as soon as possible.

FIRE wrote to the university to express concerns of the college ignoring its commitment to free speech, saying:

“ … students cannot be summoned for questioning every time they post a photo of themselves engaging in recreational firearm use.”

According to the FIRE website, the director, “ … later told FIRE that the meeting was not an investigation, but warned Venigalla that it was mandatory.”

The “mandatory” meeting still went ahead as planned.

During the non-investigatory meeting, the director brought up evidence they had on Venigalla: An essay he wrote for a class on terrorism, war, and justice almost a year ago, which apparently had somehow been obtained without investigation.

In the essay, Venigalla wrote that violence against authorities, but not civilians, was sometimes justifiable, citing the Boston Tea Party as example.

The director then turned the focus on some of the student’s Facebook posts which expressed, “ …  disappointment over losing an election for a student government position, in which Venigalla said the Greek life system wields too much political power on campus.”

These red flags, coupled with pictures of Venigalla holding unloaded firearms at an off-campus event, apparently drove LIU to make an example of the student.

Although it is a private university and not bound by constitutional First Amendment Rights, according to FIRE the college “ … is legally and morally bound to honor the promises it makes to students.”

“Free expression matters because it is through the unrestricted expression of ideas that we learn and grow in wisdom.”

In a comment about the situation, FIRE Senior Program Officer Sara McLaughlin said:

“By calling in a student for a mandatory meeting about photos of his participation in a recreational gun event, Long Island University has sent a message to its entire student body: Watch what you say. Universities that promise to protect free speech should not hold mandatory meetings for students who engage in it.”

What do you think of this situation? Was the university right to be concerned? Leave us a comment below to let us know.