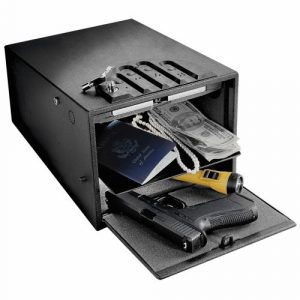 A new gun storage law has been adopted in Beacon. Passed on Dec. 5 by the City Council on a 6-1 vote, the measure requires gun owners to keep loaded firearms in a “safe storage depository” (gun safe) or to be equipped with a “gun-locking device” when children and teenagers 16 years or younger live in or are visiting a home.

The law does not contain an earlier provision that would have allowed handgun bullets to be sold only to gun owners with a firearms license. During the Dec. 5 meeting, the council also removed language that would have applied the law to circumstances involving the mentally ill or persons under restraining orders.

Council member George Mansfield said that while he supports teaching gun safety to children and teenagers, “I don’t believe education is the answer to this and it certainly should not be in lieu of this. I don’t think you’re going to be educating toddlers, and toddlers are often the ones who are hurt in homes.”

Mayor Randy Casale cast the lone vote against the measure, calling it redundant and saying “it’s not going to accomplish what we want it to accomplish.”

The law is modeled after one passed by the Albany city council in 2015 but adds the language regarding minors. Gun-rights advocates criticized the proposal during two public hearings, calling it unconstitutional and unenforceable. However, City Attorney Nick Ward-Willis advised the council that the statute passes constitutional muster.

“Even if it’s never enforced and it’s only from education that people further secure the devices in these instances with minors, that’s a good thing,” Councilperson Lee Kyriacou said before the vote.

The safe-storage movement began to gain momentum in New York after Nicholas Naumkin, 12, was killed in 2010 in Saratoga County by a 12-year-old friend playing with a handgun found in the home. A proposal for a statewide law was approved by the Assembly last year but failed to pass the Senate.

Gun-rights supporters were dissatisfied with the Beacon council’s vote, noting that New York already requires background checks on firearm buyers. Peter Pavelock, a Beacon resident, and retired Dutchess County law enforcement officer called the measure a violation of the Second Amendment. “It’s a fruitless law,” he said. “We don’t need a law like that and there’s nobody to enforce it.”