The Buzz in the Media 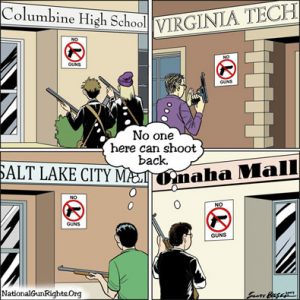 Pro-gun folk like myself love to talk about how awful “No Gun Zones” are and how people in those places are prime targets for lunies who want to go out with a “bang.” There is some conflicting research of course, but the truth is that very few of what the media has labeled as “Mass Shootings” happened in a place where average citizens are allowed to carry weapons and defend themselves.

The Difference between Government & Private
The Federal and local government restrict weapons in many places. The Federal government does not allow firearms inside any federal buildings, on the property of a National Memorial/Monument, or on the property of a federal secure area (military establishments for example). Your local state, county, and city government agencies may also have restrictions in place. Consult an attorney or a local firearm instructor to get some clarity on where the local government has restricted weapons. To violate these restrictions is often a criminal offense. This means the government may press charges and your potential penalties could include fines and/or jail time… not to mention a criminal record. A felony conviction of any sort would lead you to not being able to own firearms ever again.

With few exceptions from state to state, the law grants private property owners the right to place whatever restrictions, including prohibiting firearms, they wish on their own property. This means that the owner of a store, dining establishment, business, movie theater, shopping mall, etc can choose to prohibit firearms if they wish. The burden is on that property owner to communicate any restrictions to you visually, in writing, or verbally. However, to violate these restrictions is not a matter of criminal law. It is a civil infraction. If a property owner finds you in violation of a no weapons restriction it is up to that property owner to press charges. This would incur in a civil court and the potential penalty could include financial compensation for any damages caused.

Often trouble arrises when an armed person refuses to leave a property at the owners request. Police are called and the person is charged with other criminal charges such as disturbing the peace, public disturbance, or assault.

What Are Your Options?
First, do not ever violate a law imposed by local or federal government. Recognize in most places when the government restricts weapons they have on-site armed security or law enforcement personnel.

As for private property, let me suggest the good, better, best scenarios below:

Good: Consider alternative ways to defend yourself. When you are on these properties, know the layout and exits of the establishment. Often times you may carry pepper spray, mace, or a good knife for any potential close encounter.

Better: While I would never recommend that you break a law, carrying a weapon on private property, against the wishes of the owner, is not a criminal offense. If you conceal well and agree to leave the property if asked, without making a scene, then it really shouldn’t be a big deal. However, be prepared and consult an attorney about the potential consequences.

Best: Take your business somewhere else. It is likely there is a competitor not far away that has no issue with you arming yourself in order to defend yourself and others in an emergency. Boycott those businesses that do not want you to have that right.