Join Our Newsletter
Shop Our Store
MAIN MENUMAIN MENU
By Matthew Maruster on February 8, 2022 in ccw

As if you needed any more reasons never to enter New York with a gun, here is a story posted by multi-time national and world champion shooter Robert “Bob” Vogel. In the post, he describes a run-in at JFK airport where police nearly arrested him for the gun in his luggage. 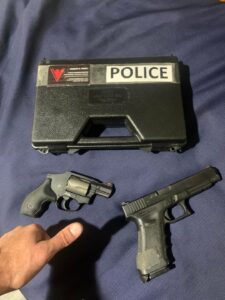 Flying With a Gun in New York City —

It’s a general rule of thumb that gun owners should avoid New York if possible. Those who travel with guns often know to avoid booking flights that even pass through any New York airport. In addition to his recognition and experience as a top shooter, Bob Vogel is also firearms trainer and not new to the rigmarole of bringing guns on a plane.

But what happened even surprised him. So he said he had to share the story on Facebook, which is where I got the information for this post.

Vogel was flying from Columbus, Ohio, to Los Angeles, California, to instruct a firearms class. He followed the rules and checked a couple of firearms at Columbus’s ticket counter. At that time, they advised him that his flight was canceled. The only option they gave him to get him in Los Angeles in time to teach the class would route him through JFK airport in New York City.

It’s just a connection; I’m not getting my bag, so let’s see what happens.

He arrived at JFK airport and found his connecting flight to California. After he and everyone else boarded the plane, he heard his name announced over the intercom. Two TSA agents told him he needed to leave the plane with them. The TSA Agents told Bob firearms were “found” in his luggage.

I put “found” in quotation marks because, per policy, the American Airlines clerk had already tagged the bag as containing firearms in Columbus, Ohio.

According to Bob’s post, the TSA agents told him he would be arrested and fined for violating New York law and TSA regulations.

None of that happened because Vogel is still a sworn reserve law enforcement officer, which allows him to possess a firearm in New York City.

Let this be a lesson to anyone reading and considering a flight that passes through an airport in New York City. Just don’t do it. Even if you’re a law enforcement officer, you’re likely to get hassled and threatened.

I also think it’s worth pointing out the obvious. Not at one point did Bob possess or even have the opportunity to gain possession of the firearm. Would New York City be a safer place if they had arrested Bob Vogel? But, of course, that’s not the point of such a ridiculous law. The purpose is to harass and hinder law-abiding gun owners.

Do you think the world would be a better place if every city enacted laws similar to New York? Let us know in the comments.